Overview
For over 80 years watercress has grown in the spring water. A man named Wilson Carmack was most famous for harvesting the watercress that naturally grew around the spring. He leased a portion of land from Fountain Rock Lime and Brick for his watercress business.

To harvest, he would cut the watercress with a sharp knife and tie it with string. Next, the watercress bunches were layered in barrels with ice and taken to Baltimore to sell. Mr. Remsburg also harvested the watercress after Mr. Carmack. 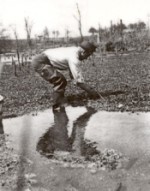