The Eastern Black Walnut is a prized hardwood. The brown, fine-grained wood is used for gunstocks, furniture, and cabinets. Black Walnut is a tree of rich, open woods and roadsides and has often been used as a shade tree.

The large, fragrant leaves have 15 or more leaflets, each finely toothed and ending in a long point. They are smooth above, hairy below.

The round nut grows in a thick green husk, from which people historically made brown dye. It has a dark, irregular, hard shell that is hard to crack, but the sweet, edible, very distinctly flavored kernel makes the effort worthwhile. 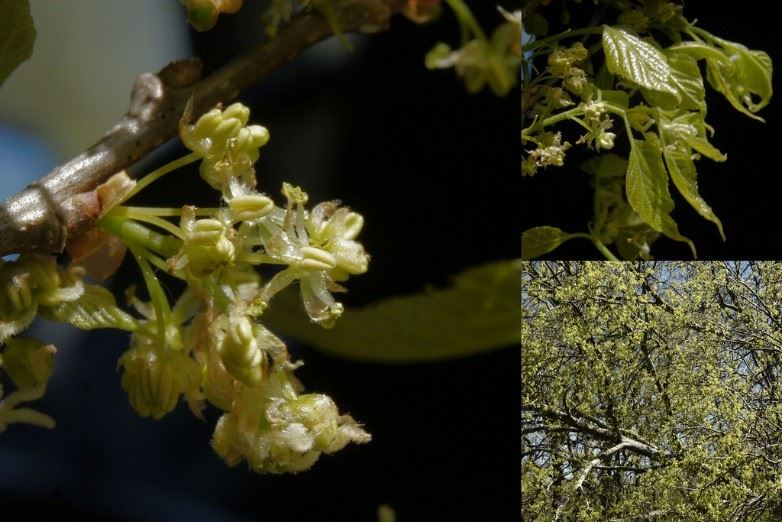 Hackberry (Celtis occidentalis), a relative of AmericanElm, but is actually in the Cannabaceae plant family, which means that it is more closely related botanically to Cannabis and Humulus (hops).

It is readily recognized by its gray, warty, corklike bark.

There are eight in North America and about fifty species worldwide. Leaves are thinner than those of Elm. The leaves are also a host for many attractive species of butterflies like the hackberry emperor (Asterocampa celtis), American snout (Libytheana carinenta), and the question mark (Polygonia interrogationis).

Some of the leaves will have small galls on the leaves which is attributed to different types of plant louse called psyllids.

The small, hard fruits are eaten by wildlife, being a favorite of robins, cedar waxwings, and mockingbirds.

The wood is coarse, soft, and rather weak and is used occasionally for furniture and fencing, though Hackberry is primarily a shade and shelter belt tree or windbreak.

A shelter belt is a line of trees or shrubs planted to protect an area, especially a farm field, from strong winds and the erosion they cause.

Attributes of the Hackberry are that it grows in a rounded vase like shape, resists disease, grows quickly, tolerates air pollution, is draught and salt tolerant, and supports a wide variety of wildlife.

It can be found in all regions (Mountain, Piedmont, Coastal) of Maryland and the second largest Hackberry in Frederick county is located at Catoctin Creek Park another Frederick County Division of Parks and Recreation park.

American Sycamore (Platanus occidentalis), or Plane trees, beautify stream banks all through the East and in some of the valleys of the Southwest.

The three native species to North America are characterized by bark, which peels off in large brown sheets, revealing the cream colored fresh bark beneath and giving the trunk an attractive mottled appearance.

Of the native species, the American Sycamore is the best known, most common, and one of the largest of the eastern US.

The leaves are almost heart-shaped, maple-like, three- to five-lobed, thick, light green above, paler and hairy below. The leaves are large and dense leaves that tolerate smoke and atmospheric pollution.

The base of the leafstalk is hollow, concealing the winter bud. Fruits are the typical “buttonballs,” drooping ball-like “fruits” that are actually clusters of single fruits, which contain one seeded fruits, achenes like on a strawberry, that produce tiny seeds (200,000 per pound).

The seeds are dispersed by water, germinating on mudflats and point bars, which areas are found in bends of meandering streams and rivers.

The sycamore will even invade old fields as an early successional tree. It needs moisture at the time of germination, but once established it will grow on much drier sites.

The hard, yellowish to brown, coarse-grained wood is resistant to splitting which made it suitable for shaping into buttons and the lumber is still known as buttonwood. Other uses is for paneling, furniture, boxes, and woodenware.