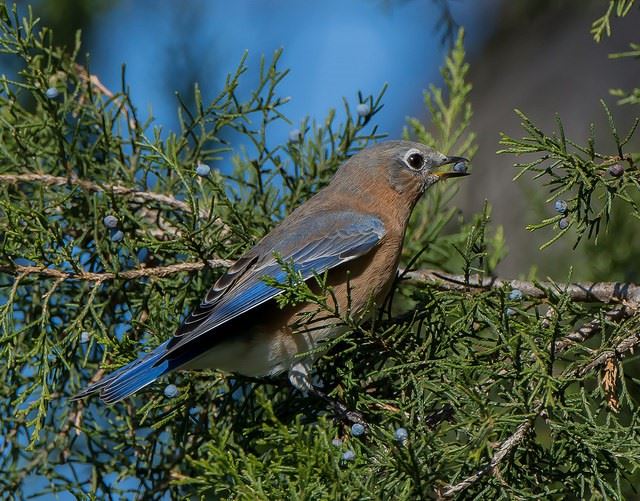 Sitting on fences, low tree branches, or perched upon their artificial nest boxes, you will find this small bird with round head and big belly.

They often nest in nest boxes due to lack of habitat but will nest in small holes of trees. Males offer nesting material and food during courtship. Females build the nest and may have more than one successful brood per season.

They generally do not visit birdfeeders but can be tempted in by offering mealworm feeders. Bluebirds will migrate, however in certain parts of the United States, they will remain in their breeding territory all year. 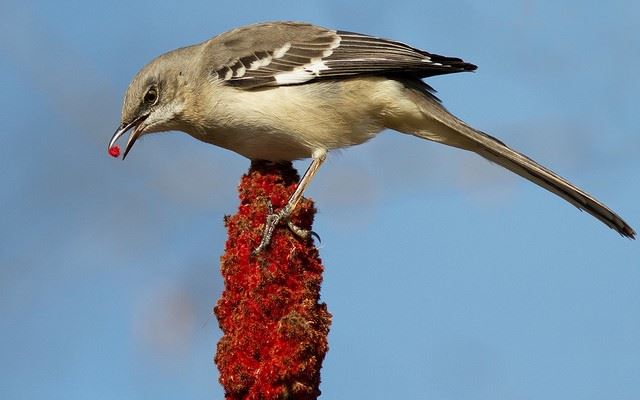 This slender-bodied bird with long tail and legs can be found on the ground or sitting on wires and fences.

The flashing white wing and tail pattern is another distinctive feature, which stands out on its grayish feathers.

Northern Mockingbirds may be attracted to backyards by providing fruit trees and bushes, but they do not often visit feeders.

Known to be prolific singers, singing all day a variety of songs including mimicking others. They can also can be seen harassing other birds who enter their territory. 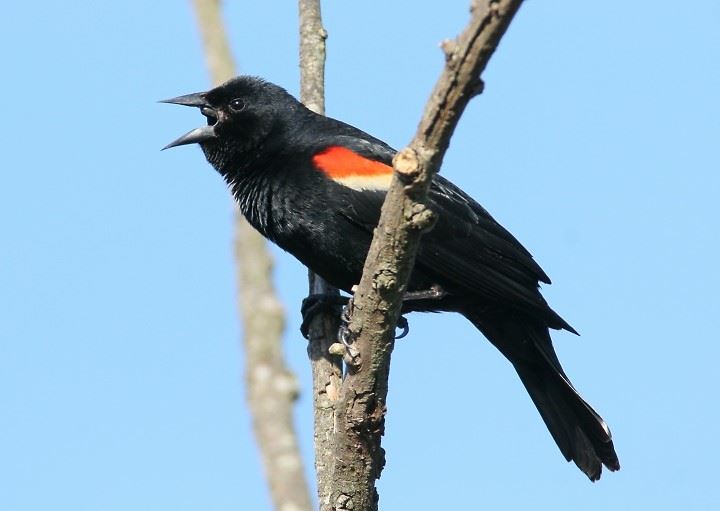 One of the most abundant birds across North America, and one of the most boldly colored, the Red-winged Blackbird is a familiar sight atop cattails, along soggy roadsides, and on telephone wires.

Male Red-winged Blackbirds fiercely defend their territories during the breeding season, spending more than a quarter of daylight hours in territory defense. He chases other males out of the territory and attacks nest predators, sometimes going after much larger animals, including horses and people.

Red-winged Blackbirds roost in flocks in all months of the year. In summer, small numbers roost in the wetlands where the birds breed. Winter flocks can be congregations of several million birds, including other blackbird species and starlings. Each morning the roosts spread out, traveling as far as 50 miles to feed, then re-forming at night.

One of the most dramatic of local birds, which are here year around, and do not molt their feathers becoming dull. The females have a dull brown color however still maintain the accented crest and a red accents throughout.

Nearly any bird feeder you put out ought to attract Northern Cardinals (as long as you live within their range), but they particularly seem to use sunflower seeds. Leave undergrowth in your backyard or around the edges, and you may have cardinals nesting on your property.

This may be the bird that wakes you up in the morning calling outside of your window in the spring. Only a few female North American songbirds sing, but the female Northern Cardinal does, and often while sitting on the nest. This may give the male information about when to bring food to the nest. A mated pair shares song phrases, but the female may sing a longer and slightly more complex song than the male.

Many people are perplexed each spring by the sight of a cardinal attacking its reflection in a window, car mirror, or shiny bumper. Both males and females do this, and most often in spring and early summer when they are obsessed with defending their territory against any intruders.